Brief summary of the results

GETTYGO is the largest German centrally invoiced platform for the B2B purchase of tyres, rims and car parts. The customer structure is quite broad with tyre dealers, garages and car dealerships. GETTYGO business customers can order from all affiliated dealers and receive only one invoice instead of from each individual dealer. The platform now offers more than 20,000,000 items. There are 55 employees working in two offices (40 in Bruchsal in Baden-Württemberg and 15 in France). The annual turnover amounts to approx. 200 million euros.

After a sustained period of growth, GETTYGO reached its limits with its old system, which had been in use since its launch in 2012. Massive performance problems were the result. They were looking for a solution that solved the problems on the one hand and was scalable on the other. The biggest challenge for IT systems in the tyre trade is the fact that 60 percent of the total annual turnover is generated within one and a half months - just before winter. These extreme peaks demand a special stability of the system. 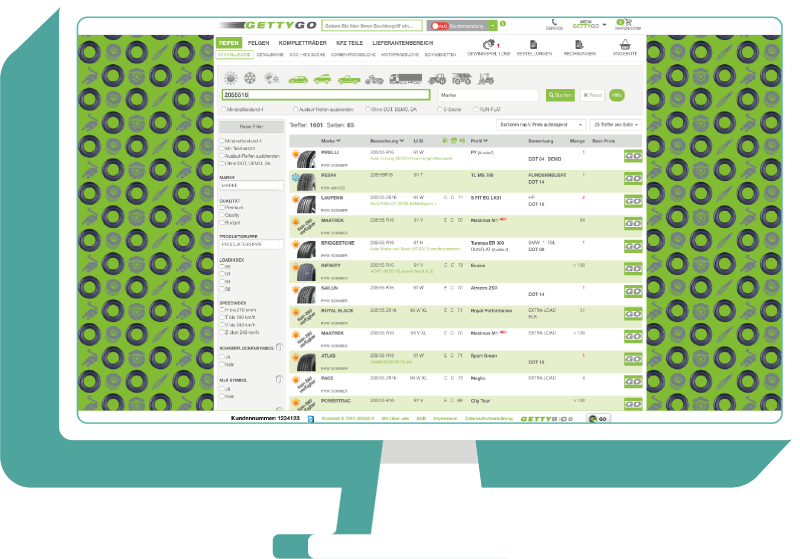 In close consultation with those responsible, we quickly realized that only an individual solution could be considered for the given complexity in order to integrate all GETTYGO processes in the best possible way. We decided to develop the backend individually and not to use a standard ERP system such as SAP, Microsoft Dynamics NAV or Sage. The entire operative processing, such as accounting and supplier connection, takes place here. Since GETTYGO's entire business model is based on the software solution, there had to be a seamless transition from old to new software. In order to implement a stable and scalable solution, we chose the Spring framework and a combination of the PostgreSQL relational database with MongoDB. Just in time for the market entry of GETTYGO in France, our system was ready for use and was initially only introduced there. We gradually optimized the software there. Subsequently, the entire system for Germany and Austria was seamlessly migrated to our system. The system runs stable even at extreme peaks and GETTYGO benefits from the possibility to connect suppliers and customers to the platform.
we solved it.